The museum is open!

We look forward to welcoming you to our exhibition „CHANGE OF LOCATION. The Museum Giersch of Goethe University Frankfurt Hosts the Art Collection of the Deutsche Bundesbank“. There are currently no Corona-related access restrictions for visiting the museum. We ask you to act on your own responsibility and recommend wearing medical masks in the building.

Change of Location. The Museum Giersch of Goethe University Frankfurt Hosts the Art Collection of the Deutsche Bundesbank (July 8, 2022–January 8, 2023)

Change of location! The Deutsche Bundesbank’s art collection, which was initiated more than sixty years ago, will be a guest at the MGGU. The works of art are leaving their traditional places in the bank and moving temporarily into the museum’s historic villa. With a selection of around ninety artworks, this first museum presentation of the Central Bank’s prominent collection provides a striking overview of the collection from the 1950s to the present—including works by artists such as Georg Baselitz, Rupprecht Geiger, Isa Genzken, Katharina Grosse, Ernst Wilhelm Nay, and Jorinde Voigt. Their thematic arrangement in the spaces of the MGGU gives rise to unusual dialogues and fields of tension.

The foundation of the collection, which meanwhile consists of several thousand works distributed throughout Germany over the various Bundesbank locations, was laid the 1950s with the acquisition of young Art Informel positions such as Karl Otto Götz or Heinz Kreutz. The collection was gradually expanded by current positions in the subsequent decades. The acquisition of paintings, prints, works on paper, sculptures, and photographs reflects the history of the Federal Republic of Germany: collection activity focuses on art from the German-speaking world; artists from the new eastern states were added following reunification in 1990.

By means of the confrontations between contemporary and historical artistic positions, thematic constellations such as “Continuation of the Gestural,” “Color Absolute,” or “History and Stories” highlight surprising aspects of the works: A work by Anne Imhof with gestural scratches in acrylic on aluminum encounters Arnulf Rainer’s “overpaintings.” Rupprecht Geiger’s bright red color field meets the ironically connoted works by Monica Baer. In their examination of German history, Anselm Kiefer’s archaizing pictorial world faces the conceptual photographs by Annette Kelm. Visitors are invited to become involved in these dialogues and engage in conversations with others.

Moreover, the museum is presenting two spaces designed specifically for the exhibition with new works by Michael Riedel and Frauke Danner, both of whom are likewise represented in the art collection of the Deutsche Bundesbank. Finally, numerous photographs make reference to the artworks’ “change of location,” showing them in the offices, corridors, and conference rooms of the Bundesbank. In a short film produced especially for the exhibition, bank employees have a chance to speak themselves, making palpable how art influences the workplace and enriches everyday office life.

How to get here

For visitors with limited mobility and visitors with prams or pushchairs, the Museum Giersch of Goethe University is accessible by way of a lift. The lift is located on the east side of the building, behind the entrance stairs. We recommend for an accompanying person to contact our colleagues at the information desk in the museum for support. Wheelchair-accessible restrooms are located in the basement.

Folding stools can be borrowed for your visit on the first floor next to the entrance of the exhibition.

The Museum Giersch of Goethe University is an exhibition center for art, culture, and science. Since its founding by the Giersch Foundation in the year 2000, its focus has been geographical on the Rhine-Main region. Within this parameter, the museum devotes itself to the discovery, study, and communication of hitherto little-noticed artistic oeuvres and cultural phenomena of all epochs to the very present.

The museum has belonged to the Goethe University since 2015. This affiliation has broadened its exhibition spectrum to include themes from the research and teaching pursued at the university. The museum moreover frequently cooperates with the institutes, scientists, teachers, and students as well as the collections of the Goethe University. As ‘the university’s window on the city’ it promotes the communication between art, science, and the public and, with its wide range of educational and communication activities, contributes to societal discourse as a whole. 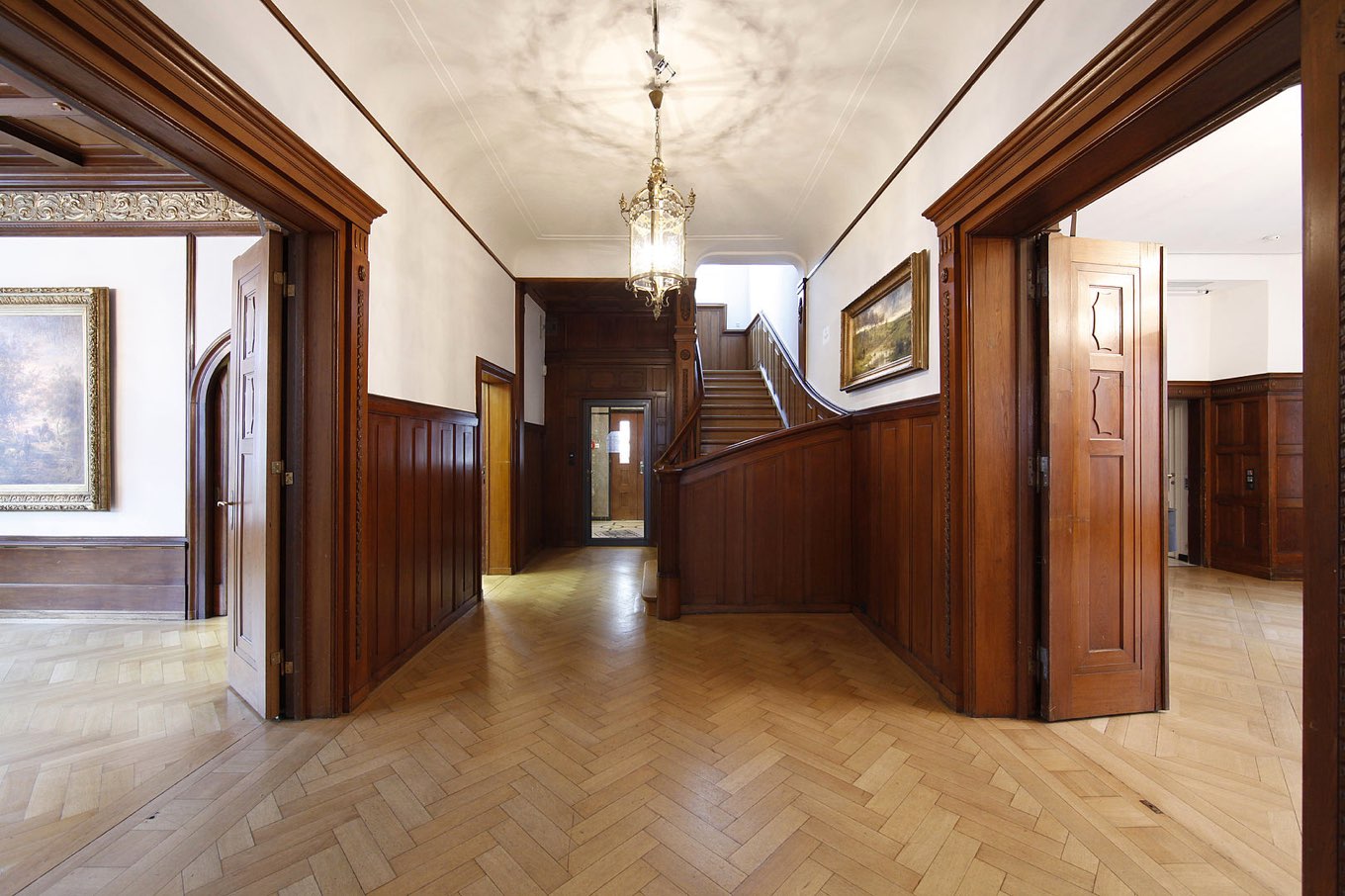 The Museum Giersch of Goethe University is located in a villa on the Sachsenhausen bank of the River Main. The three-story Neoclassicist-style mansion was built for the Holzmanns, a construction contractors’ family of Frankfurt, in 1910.
The Giersch Foundation purchased the building from the City of Frankfurt in 1998. In keeping with the rigorous requirements for the preservation of historical monuments, the new owners immediately set about having it altered to serve as an exhibition gallery, complete with barrier-free access and state-of-the-art air-quality-control and security standards. The gallery opened to the public in 2000. With their original wood panelling, the rooms on the ground floor still convey an impression of the villa’s onetime domestic character. The exhibition rooms on the upper floors, for their part, are modern in look and feel. Thanks to their compartmentalized structure, they are well-suited to accommodate the needs of the changing exhibitions.

In the villa’s garden, the Giersch Foundation had a duck fountain built with original bronze figures by the sculpture August Gaul. The design is modelled on that of a fountain in Berlin of the year 1911.
In 2020/21, the Giersch Foundation and the Goethe University had the building’s air-quality-control, security, and fire-prevention systems thoroughly overhauled. The lighting in the exhibition rooms was moreover converted for the use of energy-efficient LED spotlights.

On 24 September 2000, the non-profit Giersch Foundation opened its new exhibition center, the Haus Giersch—Museum Regionaler Kunst. The initiative for the founding had come from Honorary Senator Prof. Carlo Giersch and his wife, Honorary Senator Karin Giersch. Their aim was to create a public exhibition gallery for the presentation of hitherto unresearched facets of the history of Rhine-Main art and culture that would be of interest beyond regional boundaries.

The programme initially concentrated on surveys and monographic exhibitions of nineteenth- and early twentieth-century painting of the Rhine-Main region. Over the years, the spectrum of topics gradually broadened to encompass other artistic mediums such as sculpture, photography, graphic arts, and book art. The temporal focus widened as well and meanwhile extends from the Early Modern period to the present. A special focus of the gallery’s activities was and is the presentation and communication of its research results in accompanying catalogues and museum education work. The Museum Giersch has thus carved out a firm place for itself within the city’s wide array of museums.

In 2014, the year marking the 100th anniversary of the founding of the Goethe University, the Giersch Foundation turned the exhibition center’s operation over to the university. Since 2015, it has been known as the Museum Giersch of Goethe University. As before, it is devoted to the art and culture of the Rhine-Main region and now also presents exhibitions related specifically to the past and present of the Goethe University and its collections. It moreover serves as an event venue and place of encounter for the university community.